Zaneta Lee and her fiancé, James, were looking forward to starting their own family. They talked about having a baby for some time. After a month of trying, Zaneta took a pregnancy test hoping she’d see the two pink lines indicating she was pregnant. As the minutes ticked by, the results came back negative.

“I had just gotten off birth control, so we decided to wait another month,” said Zaneta. “Then, something told me to go ahead and take a random pregnancy test. So, I took the test. But this time, I had my fiancé look at the pregnancy test first because I was nervous that it might come back negative again. When he showed me the pregnancy stick – lo and behold – it was positive! We were happy and extremely excited.” 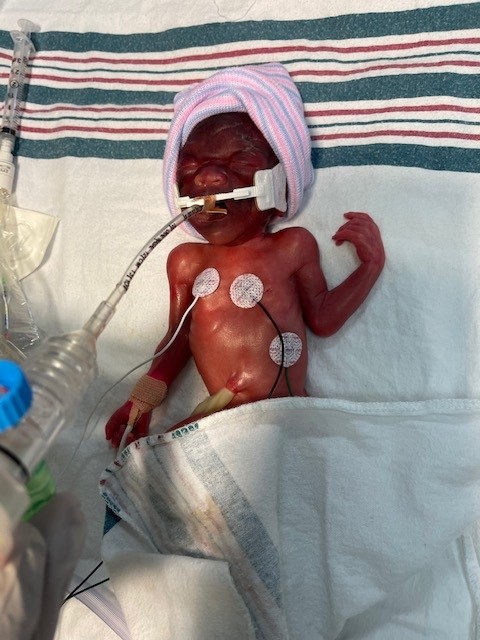 As Zaneta’s pregnancy progressed, everything was smooth sailing. Her first trimester was uncomplicated. She went to her OB-GYN for her baby’s weekly ultrasound appointments, and everything looked normal. When she reached her second trimester, she and her fiancé couldn’t wait to find out the gender of their baby. Instead of surprising themselves on delivery day, they were eager to know if it was a boy or girl. When Zaneta was 18 weeks pregnant, she and her fiancé learned they were going to have a son.

“We were thrilled to be expecting a boy,” said Zaneta. “I have a 4-year-old daughter so giving her a little brother would be perfect for our growing family. It didn’t take long for us to pick a name for our baby. My fiancé’s name is James, Junior. So, we thought it was befitting to name him James III or J3 for short.”

Just like her first pregnancy, everything was going well. But as she was nearing the end of her second trimester, she started feeling strange symptoms beginning when she was 21-weeks along. While she was working as a CNA at Slidell Memorial Hospital, she felt a trickle of fluid on her leg and thought she was leaking urine which is common in pregnancy. She didn’t really think much of it until it happened again. 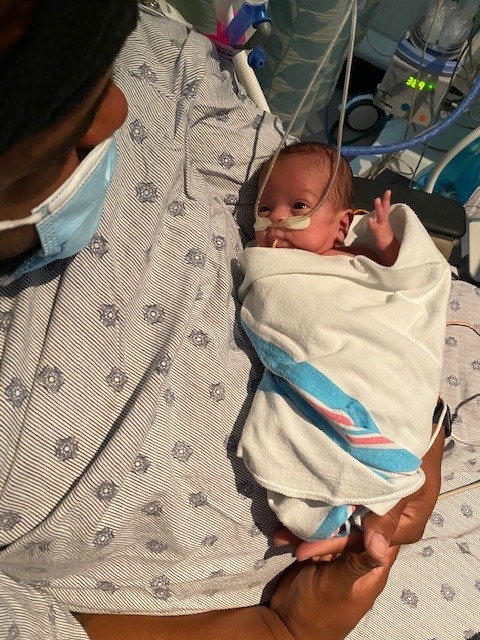 “I wasn’t overly concerned about it at first, but when it occurred a few more times, I definitely knew something was abnormal. I went to the labor and delivery floor and discussed my concern with an OB-GYN who examined me. She looked at my cervix and said everything looked fine. She told me if you feel a trickle of fluid again, come back and we will re-examine you. When I got home, I felt a trickle of fluid. The next day, my fiancé took me to the hospital to get me checked out.” said Zaneta.

When Zaneta met with her OB-GYN at the hospital, she examined her cervix. It didn’t take long for her to realize what was going on. Zaneta was four centimeters dilated – and she was only 21-weeks along. Her amniotic fluid had been leaking, which significantly increases the risk of delivering a baby prematurely.

“I was in complete shock when I heard this,” said Zaneta. “I never experienced anything like this during my first pregnancy. I delivered my daughter at 38 weeks. So, the thought of possibly delivering my son way before his due date concerned me tremendously. Immediately, I was put on bedrest at the hospital. My doctor was not comfortable with me resting at home because anything could happen at this point. While on bedrest at the hospital, I was placed in the Trendelenburg position where I was lying flat on my back with my feet higher than my head. While uncomfortable, my OB-GYN advised me to lay in this position because I was at a high risk of delivering my baby prematurely. My cervix was dilating and effacing before my pregnancy had reached a stage where this is normal. My nurses gave me a total of three steroid shots to prevent me from going into labor early. The shots helped to a certain extent.” 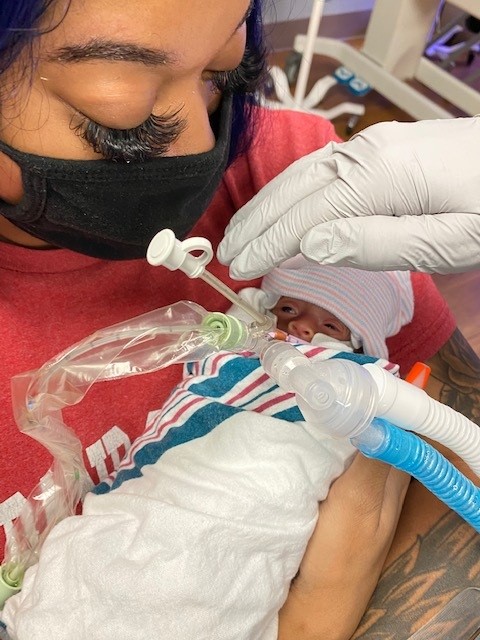 After spending two weeks on strict bed rest, Zaneta went into active labor at 23 weeks. She started having uncomfortable back pain and pressure and then began to feel contractions. They were coming in waves and happening so quickly to the point where it was too late for her to get an epidural. The baby was head down and ready to come out. On Sept. 1, 2021, James was born at 23 weeks and 1 day.

“He was very tiny and weighed 1 pound and 6 ounces,” said Zaneta. “When I saw my baby come out, it was a scary moment for me. I didn’t experience the same kind of emotions that I felt when I gave birth to my daughter, a full-term baby. I didn’t hear James let out a loud cry like babies usually do. Instead, he was intubated and transferred to the NICU. My heart was racing, and I felt anxious and helpless.”

While in the NICU, James struggled with poor growth and other neonatal complications. He had trouble breathing. He was intubated for two days before he was placed on a high flow cannula. Then, he was intubated again because a lot of fluid was building up in his lungs. In addition to breathing problems, James’ heart rate was going haywire – sometimes it would drop dangerously low and shoot up again. Since he was very tiny and could not tolerate many feedings, he had an NG tube inserted in his nose to help get him nutrition.

As weeks passed, James’ breathing and heart rate problems weren’t improving. After undergoing more tests including an echocardiogram, his doctors were able to pinpoint the cause of his symptoms. James was diagnosed with patent ductus arteriosus (PDA), a congenital heart defect common in premature infants. PDA occurs when the opening between the two blood vessels (aorta and pulmonary artery) leading from the heart, fails to close shortly after birth. If the opening does not close properly, the extra blood can cause complications including fluid buildup in the lungs making it difficult for babies to breathe. 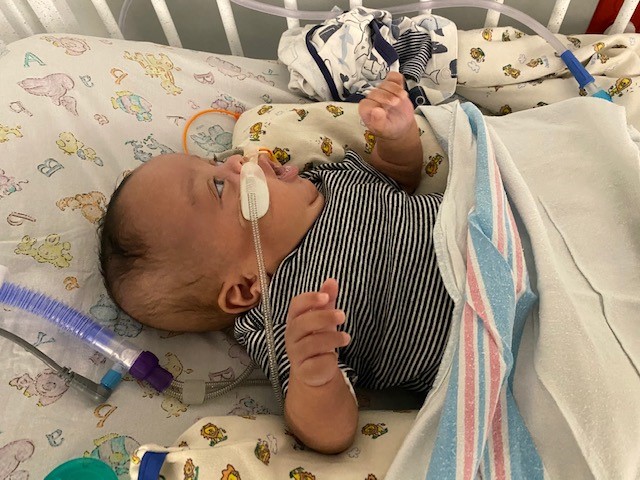 “I was worried when I found out about my son’s diagnosis,” said Zaneta. “Since James required a higher level of care, he was transferred from Slidell Memorial Hospital to Children’s Hospital New Orleans where he had a cardiac catheterization to close his PDA. I remember pacing back and forth on surgery day. The thought of my fragile baby undergoing surgery when he was a month old was nerve wracking, but his doctors and care team at Children’s always kept me updated on everything. All I could do was pray.”

On Sept. 30, 2021, when James was 4 weeks old, Dr. Sergio Bartakian performed the PDA closure using an Aplatzer Piccolo™ Occluder, a self-expanding, wire mesh device designed specifically to fit within the PDA of very tiny premature infants weighing as little as two pounds. James would be an ideal candidate.

“Our interventional cardiology team performs non-surgical PDA closures on the tiniest preemies without the need for open heart surgery,” said Bartakian, a congenital conventional cardiologist at Children’s Hospital. “To close James’ PDA, we inserted the piccolo device (attached to a wire) through a small incision in his leg and guided the device through the blood vessels in his heart where the occluder sealed the opening between his aorta and pulmonary artery. Because this tiny device is deployed in a minimally invasive manner, many babies are able to be weaned off from a ventilator days after this procedure.”

Two days after her son’s PDA surgery, Zaneta noticed immediate improvements. Her son’s heart rate was back to normal, and James was able to breathe on his own for the first time without a ventilator. This was a significant step forward in his progress. Since James’ PDA closure, his follow-up care will include regular checkups with his Dr. Bartakian, his pediatric cardiologist, to monitor him for any symptoms or any complications over time. As for his feedings, James is growing and thriving. In fact, James recently turned 4 months old on New Year’s Day, and he weighs a whopping eight pounds!

“James loves to eat,” said Zaneta. “He has a double chin and the cutest little fat rolls on his thighs. He is a happy baby. I am thankful to everyone who looked out for James. I appreciate the doctors and nurses for their patience and understanding. They helped me understand everything that was going on with my son in the simplest terms. I am also grateful to Dr. Bartakian who performed the PDA surgery on James. He was amazing. He explained the PDA procedure to me and the more he talked to me and answered my questions, the more comfortable I felt about everything. It can be hard entrusting your baby to someone else’s care, but I knew my son was in good hands and he was getting the life-saving care he needed.” 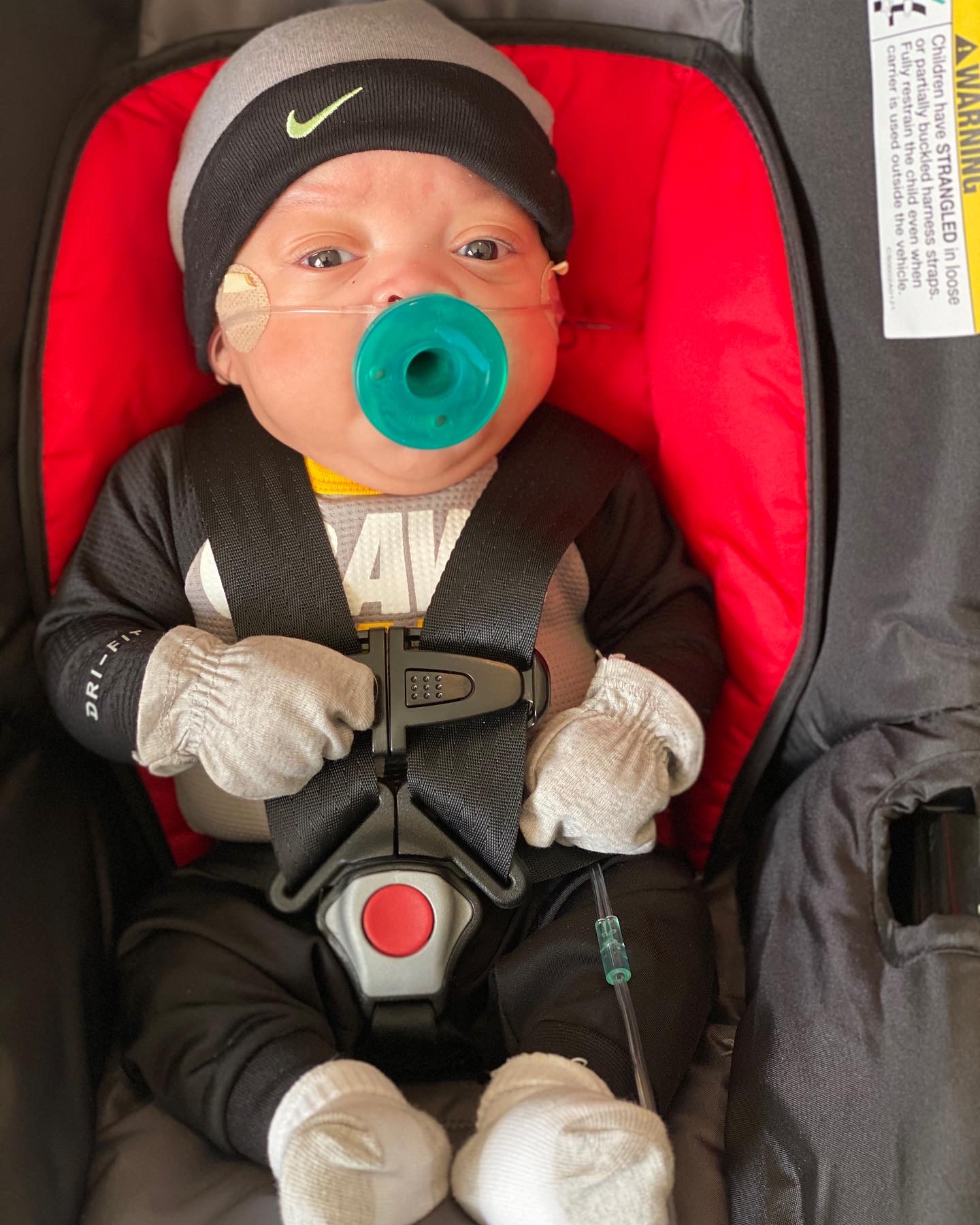 Zaneta and her fiancé can’t wait to bring their newborn son home following a four-month stay in the NICU. Recently, James underwent hernia repair surgery and is recovering from that and getting stronger every day. Since he is progressing well, his doctors say he could be ready to go home in the next few weeks.

“While these have been a difficult couple of months, I tried to remain strong and positive no matter where our journey took us,” said Zaneda. “Besides the support from my fiancé and our family, I joined several Facebook groups where I met other NICU families whose babies were diagnosed with PDA. We instantly formed a bond and we lifted each other up. This gave me strength. For families going through similar struggles, never give up hope. You have to prepare for the worst but hope for the best. While it may be difficult to do, you need to be positive. A positive mindset and my faith helped me in our son’s journey.”