“ Two years later, he runs through the hospital halls during his appointments with his cape blowing behind him, and his fiercest sidekick is still his dad. ”

Even our tiniest patients are brave, strong, resilient – superheroes.

But, being born four months premature and kept alive by a breathing machine is a tough fight even for a superhero like Roosevelt. 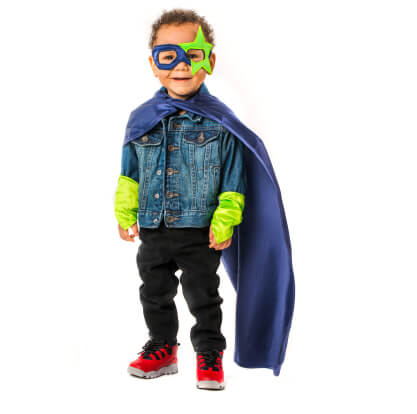 That’s why EVERY SUPERHERO NEEDS A SIDEKICK. Today, on Father’s Day, we are thankful for the fathers who are sidekicks to the superheroes who need them.

Weighing only 1 pound 8 ounces, Roosevelt was in critical condition with a severe lack of lung development. His parents, Tiffanie and Eric, felt helpless as their newborn son, and at the time, their only child, was laying in the Neonatal Intensive Care Unit (NICU) with monitors, tubes, and machines covering every inch of his tiny body.

Roosevelt needed specialized and compassionate care around the clock from the Children’s Hospital Neonatal Intensive Care Unit nurses, doctors, and staff while he stayed in NICU for 163 days.

He also needed his father by his side, whose simple prayer was, “just let him breathe.”

Finally stable, the team of surgeons at Children’s Hospital were able to perform a laryngotracheal reconstruction surgery that expanded Roosevelt’s airway and gave him his ultimate superpower…the ability to breath on his own!

Two years later, he runs through the hospital halls during his appointments with his cape blowing behind him, and his fiercest sidekick is still his dad.

In honor of Father’s Day, and dads like Eric, take the pledge and BE A SIDEKICK for our Children’s Hospital Superheroes.