“ We got extremely lucky. If I can turn around and help some other family not have to suffer, then that’s what’s most important. ”

Margaux
Patient Stories/When 'The Cause' hits home: Hogs ...
Trey Nobles is a friend of Ben Sarrat, a member of his founding Hogs team and a volunteer and supporter of the organization since its inaugural cook-off. He participated in three Hogs for the Cause events before he unexpectedly found himself in the center of the cause he was supporting. The day after the third annual Hogs for the Cause, his daughter, Margaux, was born. Five months later, she was diagnosed with neuroblastoma, a form of cancer.

“I called Ben,” said Trey, overcome with emotion. “I asked him, ‘Do I stop caring about my child so it doesn’t hurt as much if she dies?’ He told me the only thing I had to do was suck it up and take the burden upon myself. ‘Everyone else around you will crumble, but somebody needs to listen, to pay attention, to ask questions and to double-check the answers. That somebody is you.’”

Facing a sorrowful and fearful journey, Trey left his job to care for Margaux while his wife, Cherie, became the primary breadwinner. In Margaux’s head, the size of a grapefruit, was a tumor, the size of a plum. Its growth was beginning to cause nerve and arterial damage and would continue to devastate her tiny body. A surgery was performed to remove part of the tumor, and Margaux began a course of chemotherapy that would hopefully shrink what was left.

Daddy daycare was not what Trey had expected. He and baby Margaux’s days were spent in and out of Children’s Hospital. Afraid of shots himself, he had to learn how to give them.

“Ben filled out the application for me,” said Trey. “He told me we’d done enough to help him. He insisted that Hogs for the Cause would help us now.”

One year following Margaux’s initial diagnosis, scans revealed an unexpected discovery. Her tumor was completely gone. Her oncologist, Cori Morrison, MD, recommended a second round of chemotherapy to clear any potential cancer remaining in her bone marrow. After her treatments, it was evident Margaux escaped the fate of so many pediatric cancer patients before her.

“We got extremely lucky,” said Trey, who will be cooking with his team, Hog Dat Nation, at the upcoming Hogs for the Cause. “If I can turn around and help some other family not have to suffer, then that’s what’s most important.” 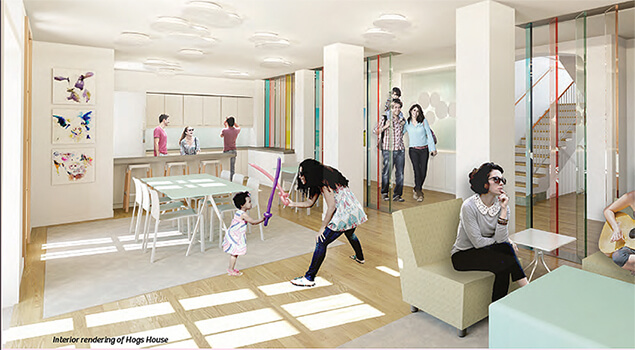 The Hogs for the Cause gift is laying the groundwork for future philanthropic goals of Children’s Hospital. As the hospital embarks on the largest expansion project in its history, it will reach out to the community for involvement in its own cause - improving the healthcare of children throughout the region.

“This pledge will hopefully engage the city in helping support our bigger expansion,” said Olsen. “We couldn’t be more grateful for this launch gift. Family housing is one area the community is interested in supporting and a clear need for families. We are excited about bringing this project to fruition.”