“ We were confident in the Children’s Hospital team. Because of the risk of complications, it was important that we stayed local. To have this expertise in our own backyard was a gift for us. ”

Claire
Patient Stories/What makes her tick? Patient ...
Claire was born with Tetralogy of Fallot, a heart condition that causes oxygen-poor blood to return to the body due to a number of defects in her heart. The imminent need for open-heart surgery led her parents, Rebel and Charlie Caplinger, to research the best hospital and surgeons to entrust their newborn baby. Children’s Hospital and pediatric cardiothoracic surgeons Joseph Caspi, MD, and Tim Pettitt, MD, rose to the top. At 5 months of age, Claire underwent a lifesaving operation to repair her heart. Claire’s condition, however, would require lifelong treatment with periodic pulmonary valve replacements to prevent leaking of her valve.

For nearly 12 years, the Caplingers enjoyed life to its fullest, with Claire thriving alongside her older siblings, Addie and Connor. Residing along Bayou Liberty in Slidell, La., with frequent trips down to their camp in Venice, La., the Caplingers love living and playing on the water. Whether deep-sea fishing in the Gulf of Mexico or paddle boarding on the bayou, there are few aqua adventures the family doesn’t enjoy.

Two years ago, Rebel and Charlie noticed a slight change in Claire. She seemed to tire a bit more easily and eat a little less pizza. They sensed the time to replace her valve was approaching. Again, they sought medical advice from a number of experts. Again, they knew the best choice for Claire.

“We’re going back to Children’s,” said Rebel, who spent 33 days at the hospital after Claire’s first surgery. The Caplingers developed appreciation, respect and love for the doctors and staff who cared for Claire, and came to understand the difference and importance of being in a pediatric specialty hospital.

“We could have gone anywhere,” said Charlie. “We were confident in the Children’s Hospital team. Because of the risk of complications, it was important that we stayed local. To have this expertise in our own backyard was a gift for us.”

In 2000, four years before Claire was born, doctors in France successfully placed a pulmonary valve in the heart of a 12-year-old patient through a catheter. It was a “first in man” case that began the evolution of transcatheter valve therapy. 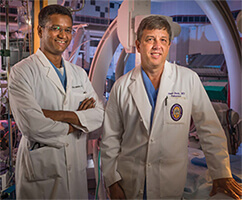 In 2010, when Claire was 6, the first pulmonary valve, the Melody valve, was approved for use in the United States. Around that time, the COMPASSION study began on a second type of valve that would later have a significant impact on Claire’s life. Kiran Mallula, MD, MS, was among the cardiologists participating in the study while training at Rush University Medical Center in Chicago.

“Out of every 1,000 babies, five are born with congenital heart disease, and 25 percent of those will have critical heart disease requiring surgery or other procedures,” said Dr. Mallula. “Those are the patients we are trying to help. Valve therapy is my passion. That’s why I’ve worked to bring this technology here to Children’s.”

In 2014, Dr. Mallula joined pediatric cardiologist and Director of Interventional Cardiology Ernest Siwik, MD, to grow the program at Children’s Hospital. The team treats patients from a wide spectrum of ages—from newborn babies weighing 3 pounds to adults with congenital heart disease. They perform a range of minimally invasive cardiac procedures, such as placing valves, closing holes and stenting vessels.

“We are focused on the structural abnormalities that children are born with,” said Dr. Siwik, who sees the future of his field offering increasingly safer procedures that are applicable to smaller and smaller children.

One year ago, Claire underwent a transcatheter procedure at Children’s Hospital to place a Melody valve—the only one available at the time—that would repair her worsening condition. During the procedure, Dr. Mallula determined that the valve was not a good fit for Claire.

“It was not the best news,” said Rebel. “The valve was too long and would place too much pressure on her artery. We knew then that Claire was facing another open-heart surgery.”

As Rebel and Charlie began planning for Claire’s surgery next year, the U.S. Food and Drug Administration (FDA) was reviewing data from the COMPASSION trial on the Edwards Sapien XT Transcatheter Heart Valve. In March 2016, the valve, made from a cow’s heart tissue sewn onto a metal frame, was approved by the FDA for use in pulmonic procedures, significantly altering the course of Claire’s treatment.

Dr. Mallula shared news of the FDA’s approval of the Sapien valve with the Caplingers. As one of the physicians involved in the trial of the device, he knew that Claire would be a perfect candidate and had the experience to boost his claim. Rebel and Charlie were thrilled.

“Patients, like Claire, born with congenital heart disease may require reinterventions throughout their lifetime,” said Dr. Mallula. “The valves we interventional cardiologists implant have a similar lifespan as the valves the surgeons put in by cutting open the chest. With the average tissue valve lasting around 10 years, a 100-year-old person may need 10 valve replacement operations in his or her lifetime. Here, we can curtail the number of redo operations by at least half, by placing a new valve inside of an existing valve. This is a one-day procedure. Not only are we cutting the length of the hospital stay, by not opening the chest wall, we are also eliminating the risks associated with open operation. It’s an excellent treatment option for our patients.”

When Claire returned to Children’s Hospital on July 13, she thought Dr. Mallula would be performing another heart catheter to take more measurements. She really didn’t want to know more than that. As Rebel and Charlie paced the surgery waiting area, they understood something much more significant was happening.

“Of course we were more concerned about the risks of the procedure,” said Charlie. “We knew the Children’s Hospital team would do their best. Everyone wanted this procedure to be successful. Nevertheless, it grabs your attention saying good-bye to your child before they go into surgery.”

If the procedure was successful, Claire would be the first patient in Louisiana to receive the Sapien XT valve. A lot was weighing on her case as specialists from Edwards, technicians and physicians observed and assisted Drs. Mallula and Siwik while they navigated the small valve into her heart.

“Children’s Hospital has performed miracles for a lot of patients,” said Charlie. “And our Claire is one of them.”

After the procedure, when Claire recovered from anesthesia, including the much-dreaded “torture juice,” her parents spilled the beans. “It was shocking,” was her reaction to the news of the pioneering procedure she underwent. “So, y’all put me through this without my permission?!”

Fully recovered, Claire returned home the next day feeling fantastic. “There’s nothing I can’t do.” Without skipping a beat, she dove right into those activities she loves. It’s what makes her tick. She now smiles when thinking about how her new valve will help other children and feels confident when she says, “Kids like me will like it too.”