Most sports injuries are due to either injury or overuse of muscles or joints. Most are caused by minor injury involving muscles, ligaments, tendons, or bones, including:

What’s a Bruise?
A bruise is an injury to the soft tissue. It is often caused by a blunt force such as a kick, fall, or blow. It results in pain, swelling, and discoloration.

What’s a Sprain?
A sprain is a stretch or tear of a ligament. Ligaments are flexible bands of fibrous tissue that connect bones to bones, and bones to cartilage. They also hold together the bones in your joints. Sprains often affect the ankles, knees, or wrists.

What’s a Strain?
A strain is twist, pull or tear of a muscle or tendon, and is often caused by overuse, excessive force, or stretching. A tendon is a tough cord of tissue that connects muscles to bones. 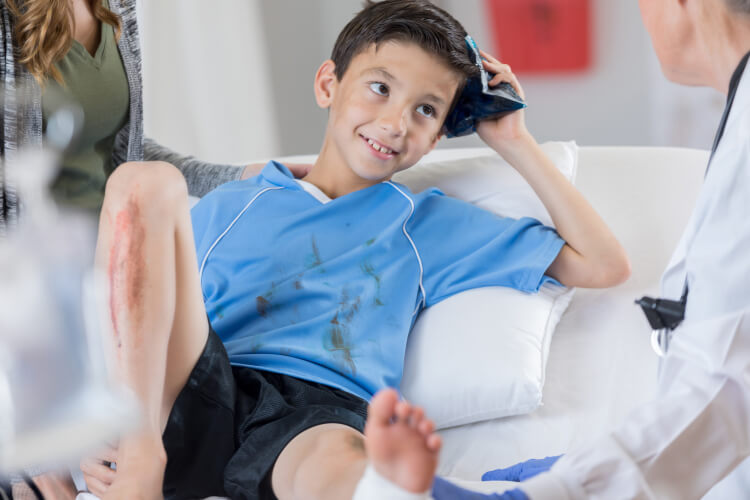 Some examples of strains are:

What’s a Fracture?
Fractures are breaks in the bone that are often caused by a blow or a fall. A fracture can range from a simple hairline fracture (a thin fracture that may not run through the entire bone) to a compound fracture, in which the broken bone protrudes through the skin. Most fractures happen in the arms and legs.

Stress fractures are weak spots or small cracks in the bone caused by continuous overuse. Stress fractures often happen in the foot or leg after training for gymnastics, running, and other sports. The bones in the midfoot (metatarsals) in runners are especially vulnerable to stress fractures.

What’s a Dislocation?
A dislocation happens when extreme force is put on a joint, allowing the ends of two connected bones to separate. Stress on joint ligaments can lead to dislocation of the joint.