It’s a fairy tale in the making: a house, built by Hogs, a haven for families of Children’s Hospital patients. If it’s true that a house is only as strong as its foundation, then this refuge at Children’s Hospital will have a long and soaring future, as storied as the fairy tale it is built upon. The project is a dream turned reality, made possible by a promise from Hogs for the Cause and a mission to help those families who need it most. 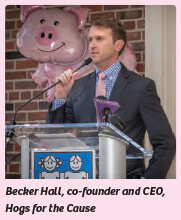 Children’s Hospital’s partnership with Hogs for the Cause began several years ago as a growing number of cancer patients received support from the evolving organization. Hogs for the Cause was founded in 2009 by friends Becker Hall and Renee Louapre for their friend, Ben Sarrat, whose son, “Lil’ Ben,” was battling an incurable form of brain cancer. From a pig roast in Audubon Park to one of the largest barbecue competitions and music festivals in the country, Hogs for the Cause is a success story in its own right. The annual event has grown to become a premiere funding source for pediatric brain cancer outreach services in the U.S.

“Sadly, brain cancer has become the deadliest cancer for children. The growth of Hogs meant we were fulfilling a lot more grants for patients at Children’s Hospital,” said Becker Hall, Hogs for the Cause co-founder and chief executive officer. “Our relationship continued to develop.” In 2013, Hogs for the Cause created the Hogs Fund at Children’s Hospital. Children’s Hospital became an event sponsor in 2015. “We were able to do those same things for children who fell outside of pediatric brain and included all types of cancer. We continued to raise more money, and we wanted to give it all back.”

In 2016, Hogs for the Cause raised close to $650,000. More than 30,000 people are expected to attend the 2017 event. While several years ago the organization was fulfilling roughly 50 grant requests a year; today it is awarding 300
grants annually for families throughout the country. Nearly 100 teams involved in the cook-off raise the funds. These donations, along with the proceeds from the annual event, are dispersed to families in need.

When Children’s Hospital approached the organization with their own funding request to renovate a building for family housing on their newly acquired State Street property, Hall, Louapre and their board brought the idea straight to
their teams.

“We told them, ‘We know this is outside of our scope, but we don’t want anyone else funding this thing. We want you guys to do it,’” said Hall. “This is going to be a Hogs house, an asset that we can look back at and be proud of. All of our teams said,‘Let’s do it.’”

With the demand for grants for families of pediatric brain cancer growing by the day, Hall knew they were facing a challenge. “We have a massive commitment now. We’ll just have to work a little harder and raise a little more. That’s just a testament to the teams that are out there every year. We’re ready. We’re excited.”

Several years ago, through his work with Hogs for the Cause, Hall encountered a family seeking care at a cancer treatment center outside of Louisiana. He asked the patient’s mother what had made a difference in her son’s treatment,
and her response pointed to the benefits of family housing. Having an environment to go to outside of a hospital room, where children like him were together, was a catalyst in his recovery. She saw a 180-degree turn in her son.

“I see families living in these hospital rooms,” said Hall. “Given the opportunity to get outside, in a different environment, with different scenery and peers just like them uplifts their spirit, changes their attitude and gives them new energy.”

Children with complex illnesses spend many days in the hospital. Families come from throughout Louisiana and numerous states to seek care for their children at Children’s Hospital. Having a place to stay and transportation are huge issues for families already struggling with their children’s illnesses.

“You will get great healthcare at Children’s Hospital, but that’s the physical part of it,” said Hall. “There’s an emotional battle that’s waged whenever you’re getting treatment. When we heard the house was what really changed that child’s attitude, that it was part of the difference toward recovery, we said, ‘We have to do this.’ We are truly making a difference in a child’s recovery by giving him this atmosphere. When we saw
the plans, what Children’s Hospital was trying to do to create this space, we all thought this is a wonderful asset we need to jump on.”

Hogs for the Cause pledged $2.1 million dollars to make the project a reality.

Construction is expected to begin this summer on one of two buildings designated for family housing. The 8,500-squarefoot Hog’s House will provide 10 to 14 family suites, two family lounges, kitchen spaces and laundry facilities overlooking the State Street grounds. The local architecture firm leading the development of the State Street property, Eskew+Dumas+Ripple, will restore the existing building, built in the 1930s and designated as a Historic Landmark. The house is expected to open early next year.

“This house will allow much-needed respite and a place for families to unwind and sleep,” said Justin Olsen, Children’s Hospital senior vice president/chief operating officer. “We have not had a place for them to stay overnight. This places them in close proximity to the facility, so they can engage and help in the healing process for their children.”

The Hogs organization plans to have a long-term presence in the house, feeding families and bringing positive energy to the space. “It’s another opportunity for our teams to really be with these families and see who they’ve been working all year to help. It’s more integration and interaction, and that’s something you unfortunately don’t have the opportunity to experience these days.”